In my series of inclusive mystery novels, the protagonist Bruno and his boyfriend have just acquired a puppy called Max and he is struck by the resemblance of the discourse of master-dog with that of master-slave. ‘He’ being Bruno. I have yet to extend my storytelling insight into the mind of an animal.

A blog post this week by the Very Rev and very jolly Kelvin Holdsworth (whose Episcopal Cathedral welcomes dogs and once yearly turns into a blessed menagerie) discusses Christian-Jewish relationships and in particular Christians celebrating Jewish Seder services. It reminded me of a lecturer at teacher training college telling us that vegetarian/ vegan Jews wishing to avoid lamb, at the Seder, substitute beetroot. Because it’s the only vegetable that bleeds.

I know vegetarian/ vegan Jews (and Christians) who have eaten lamb at the Seder out of respect for the tradition and because this death at this time serves a higher purpose. One of these friends is a Jewish atheist whose belligerent politics are so far to the Left she could have served as the inspiration for ‘Milly Tant’ of the comic book, Viz. She now eats beetroot instead and is grateful for the info (so do pass it on).

Without wishing to stray into theories of atonement and supersessionism (I just learned that word, from the same blog, and am practicing using it) I think it behoves Christians at Easter and Jews at Passover to think about animal sacrifice. It’s a word that, nowadays, we use only in reference to Voodoo and to vivisection. Having lived in Brazil, and having more university degrees than sense, it is clear to me that the pious practitioner who sacrifices an animal in order to attract a blessing has more claim to serving a higher purpose than the callous ‘researcher’ who just wants in-vivo on her CV. Especially when the sacrifice is proceeded by torture of the animal and when the products being tested are cosmetics.

Biblical animal sacrifice, in both the Hebrew and Greek scriptures, was a merciful alternative to human sacrifice. Which was always in the background and on one occasion came to the fore. One does not have to believe that Christianity is the more ethical continuance of Judaism in order to affirm that people of good will (which may include many atheists and exclude many theists) have a duty to find increasingly merciful alternatives when faced with an apparent need to cause pain and death to either humans or animals.

The substitution of a ram for Issac (for Ishmael in the Qur’an) is the sacrifice of something extremely valuable, especially in a nomadic herding community, in place of a human being. The callous contempt with which we treat animals as only instrumentally valuable – caged, tortured and killed for our gluttony and our vanity – when merciful alternatives are plentiful, cannot be called good will; it is not benevolent but malevolent. It is evil and not less so for being so bland, so everyday, and so unthinking.

This Easter, this Pesach, when we meditate on the lamb that was slain, let’s think about the humble beetroot and ask ourselves if enough blood has already been spilled in the name of religion and if we really need to be so bloodthirsty. 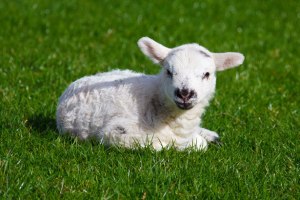