When he began heckling the audience, we all thought it was part of the show; but it quickly became apparent that this dour man with the dour voice was from a dour church in the West End. The ones leafleting against Bill Kenwright’s production of Jesus Christ Superstar by Andrew Lloyd Webber and Tim Rice, on the last night at the first tour venue: Glasgow’s King’s Theatre. I’m a fan of musicals and a big fan of this one; I’m not a fan of dour churches. Yet, as I watched him through my opera glasses (I was up in ‘the Gods’) as he was shouting and then being escorted out, I was struck by his passion.

It’s a passion that is profoundly anti-cultural. This extreme version of Calvinism in recent years has damned half its former flock to Hell for continuing to associate with a man who attended the funeral of his Roman Catholic friend, and in years past was a major contributory force in killing off community life on the remote island of St Kilda. It’s dour and it’s thrawn (‘bleak’ and ‘obstinate’ don’t translate those Scots words very well). Yet, for all that, and for all its misogyny, homophobia, sectarianism and general anti-modernism, it’s passionate.

Being passionate about the passion of Jesus of Nazareth, or even being struck by the story, isn’t cool in the West End of Glasgow where I live. That thrawn dour kirk (church) is anomalous here. It’s not only that an entire post-Christian generation associates that story with the more dour aspects of that dour church and generalises them to all passionate Christians everywhere, it’s also that this story isn’t told. Or, at least, it isn’t told well.

Some years ago, standing at a bus stop on Great Western Road, I watched Greeks bearing candles spread out from the Orthodox Cathedral of St Luke, carrying the light of Easter home. One of the two blondes scratching their heads at the bus stop managed to articulate: “whit’s tha’?” (what’s that) and when I replied “it’s Easter” her interlocutor turned to me in surprise and said “Aa fo’ tha’ wiz bunnies” (I thought that was bunnies). It wasn’t their use of the vernacular I objected to; it was their lack of cultural literacy.

Thin-skinned Christians may find all sorts of things to object to in Superstar. They may be happier with Franco Zeffirelli’s deeply moving, and slow-moving, Jesus of Nazareth. However, they should realise that, for many secular people, the prime source of information on this story is neither the sacred scriptures nor the spiritual screen versions but the satirical comedy, Monty Python’s Life of Brian.

As I watched the Company throwing themselves about the stage with such energy, some dramaturgical questions arose:

As I listened to the main characters, and especially the chorus, sing, other questions arose:

These questions were accompanied by an appreciation of the excellent stagecraft of the production. Props were set and struck so smoothly and most timing, such as Pilate just avoiding the lash that cracked at his back, was excellent. The multi-level, multi-purpose set reused what was static and moved what was mobile – and the location of the cross was artistic genius.

When Tim Rogers’ voice warmed up, he gave us all the variations of the very challenging vocal part of Judas; when Rachel Adadeji stopped sounding as if she were Joan Armatrading very carefully singing the World Service Shipping Forecast and just, as we say in Glasgow, geid it laldy (belted it out) as Mary, she was wonderful; and Glenn Carter was simply amazing, singing as Jesus often in a head voice that was all heart. I loved Alistair Lee’s scheming Annas and my theatre companion loved Kristopher Harding’s versatile Simon. Neil Moors sang Caiaphas’ tuba voice suitably and Tom Gilling performed Herod’s decadent role more camply than I’d imagined possible. Jonathan Tweedie’s Pilate was sung with gravity and acted with dignity, and the supporting roles did just that.

The question that resounded in my head as I left the theatre was sung early in the show:

I last saw this show when I was 16 and in the grip of a religious passion not unlike that possessing the heckler at the start of this performance; only I don’t think I was that thrawn and I hope I was never so dour. I was moved to tears at the end. I’ve never cried at a performance before or since and I didn’t last night. My answers to this last question may have changed but it is still important to me. I may never formulate them completely, but I suspect they involve a spirituality that celebrates culture as co-creation, one that sees the power and glory and the responsibility of compassion; a spirituality based on participating in a powerful story, in good company, and being moved by passion.

It’s also a never-ending story. It’s not only the poor, as prophesised, that are with us always but also the persecuted. This is a story of Near and Middle Eastern macropolitics, it’s about expediency and lack of accountability, it’s about collateral damage and protecting the interests of the powerful. It’s about faith, hope and love in a time of cynicism and despair. It’s a story that can inform our reflections on food bank Britain, on Greece and Spain and Ireland under austerity and on the Cold War chess game of death being played out in Syria – where crucifixion is no-longer obsolete.

Jesus Christ Superstar is on tour. Information on venues, dates and tickets is here. 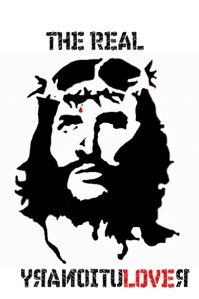 Thanks to Lee Wag for releasing his image “Jesus Christ Revolution” into the Public Domain.