At least this time of the year, TV nuclear families are a little more extended. There could be up to 12 people round the table noshing into some unfortunate fowl. That’s three times the usual number because, as we know, the usual number of family members is four. Three of these have blonde hair, one has black hair, all four are White and nominally Christian and preferably Protestant (even if evidently Jewish). We know this because this is how things have always been. Always and in every place. Adam and Eve, Cain and Abel; Abraham (and everybody else); Jesus, Mary and Joseph; all royal families and our own family. The one we all grew up in. It’s reassuring.

There are, it has to be admitted, certain types who have other ‘arrangements’. These people are usually foreigners, not nice, heretics, and noisy. Trains don’t run on time where they come from. In our TV town, neighbours greet each other and everyone leaves the door open. Even though they immediately plonk keys into a wee bowl on the wee table right next to the unlocked door. Well, we can’t expect TV to mirror reality exactly.

So where does this black haired White man with his Nordic spouse and offspring hail from? The answer’s in the question. The clues are an adjective and a verb. The verb relates to a greeting that was originally pronounced ave and in more modern times salve and heil. The adjective describes the location of this fascist fantasy.

Mediterranean fascists (normalised as black haired White men) fantasised about ‘raising the colour’ – that dreadful expression familiar to anyone with experience of colonial racism. Have you ever wondered why so many White women, as distinct from White men, feel the urge to dye their hair blonde? The black haired White husband with the blonde White wife and two Nordic children has become so normalised on TV portrayals of generic families that it’s now unremarkable.

Umberto Eco, in The Mysterious Flame of Queen Loana, an archaeology of fascist family memory, shows just how explicit was the erasure of multicultural Mediterranean identity in children’s and adult literature sanctioned by church and state in Italy and Spain during the reigns of Mussolini and Franco.

This erasure continues today. Extended families are like unexpected gifts of puppy dogs. Just for Christmas. They have no place in today’s TV nuclear family. Fascist dictators may have initially encouraged large families, with the connivance of the Catholic Church, but family size can always be altered at the convenience of the state. ‘Two will do’ is a eugenic command that TV has obeyed.

So when you see a Mediterranean patriarch with his peachy Uberwife and a pair of apple cheeked children, think about all the households you know, with all their other arrangements. Think about how this TV fascist family makes them feel.

It’s not all tutti frutti, is it?

Thanks to Karen Arnold for releasing ‘public domain vintage painting of a family outing’ into the public domain.

Lesbian transsexual Orcadian Konstantina Fulbright-Lebowski (KFL for short) swinging single and sole proprietor of Deli Smelly, San Francisco’s waterfront’s latest and tastiest locally sourced organic Wiccan charcuterie – because, hey, meat may be murder but business is business – backflipped her perfect twentysomething bubble butt into crouch position and then exploded into a bençao capoeira kick that sent the head of her android Sensei, Maximilian 3PO-Boombox, spinning off into the corner of her small but lavishly decorated cave dwelling on the far side of Ganymede. Where all earthlings and earthcities were now located. Cos of the Pulse.

Readers won’t know whether they’re reading Anna Karenina, Buffy the Vampire Slayer, Rotary Spokes or a Culture novel. Mostly they’ll just be confused. The author of this kind of fiction is generally the graduate of a creative writing course whose enthusiastic teacher has encouraged the class to ‘create diverse characters’. The result is like one of those toys that switch heads, trunks and legs – and what is supposed to be entertaining ends up as incoherent. Add to this confusion a method of direct exposition from narrator to reader similar in style to the rapid reading of T&Cs on adverts, and enjoying this style of writing takes a lot of hard work.

I admit that the opening scene of the first book of the Bruno Benedetti Mysteries throws a lot at the reader all at once. However the reader is in the mind of the protagonist, and narrators are always unreliable. Tricks of the Mind is driven by a frustrated libido that makes Bruno mad, bad and dangerous to know. So when he enters, to find the object of his affection exercising on the hearthrug, his erudite consciousness is trying to focus on anything but the cheekily handsome face, glistening hard muscle and skimpy shorts of his cocky Cockney flatmate.

Readers hardly ever need to know a character’s surname, and the practice of varying between first name and surname (very common in thrillers) can cause them to lose the plot. Readers also don’t need to know everything at once. Let’s slow that example paragraph down:

Konstantina backflipped her perfect bubble butt into crouch position and then exploded into a kick that sent the head of her Sensei spinning off into the corner of her small but lavishly decorated cave dwelling on the far side of Ganymede.

“Nice bençao!” rasped a metallic voice from the corner, “I told you the Terran martial art of capoeira was worth mastering.”

“Max it’s so creepy when you talk with your head off! Reattach!”

“And it’s very disrespectful when a student addresses her Sensei by its first name during training.”

“I mean no disrespect, Sensei 3PO-Boombox, I guess my mind is on the opening of the Deli tonight.”

The android reattached its head before replying. “Konstantina Fulbright-Lebowski, your ancestors from far-flung Terra did not colonise this moon for the sole purpose of the provision of charcuterie!”

I still don’t want to read it because all it’s giving me is information. When I care (marginally) more about the Yodayadda of a robot than the preoccupations of a lovely young lady, something is clearly wrong. Let’s try another tack:

Konstantina was almost afraid to touch the shimmering green fabric. The fragile tunic, gift of her Orcadian grandmother, was one of the few remaining articles of clothing made on Terra. There were no silkworms on Ganymede. A silk tunic belonged in the Hall of Memory. It should not be worn by the sole proprietor of Deli Smelly on her opening night. Not even if Ivanya would be there. Not even if she would be sure to notice that the colour, exactly, matched Konstantina’s eyes.

She glanced at the chronograph, sighed, and replaced the garment in the alcove at the back of her cave. She just had time to fit in a combat training session with Max. It would clear her head.

Okay, now I care. I want to bomb the deli, for its silly name, I want to know how this tunic is expected to survive (in an alcove, in a cave, on a far-flung moon) and I also want to know what happened to Grannie and if there’s life on Earth. And more about Max. Cos he’s probably dead fit and I’m going to be terribly disappointed if I find out he’s made of silicon and not carbon. Maybe. I’m not that bothered about Ivanya (I mean why does our lovely girl have to work so hard?) but I might be if she’s Max’s fiancée. And he’s secretly planning a sex change but is kidnapped by the besotted Tyrant of Ganymede. I want to know now. I know it’s got silly but, admit it, so do you!

Don’t chuck everything at the reader all at once. You are the creator of this world and of these characters. Take the reader gently by the hand and lead on, leaving a trail of breadcrumbs as you go. Remember, if you write, you’re a writer. Even God put in the best part of an intensive week of practice before creating human characters. Let yourself make mistakes, and above all enjoy it.

I have to sign off, I’ve suddenly developed an interest in Sci-Fi… 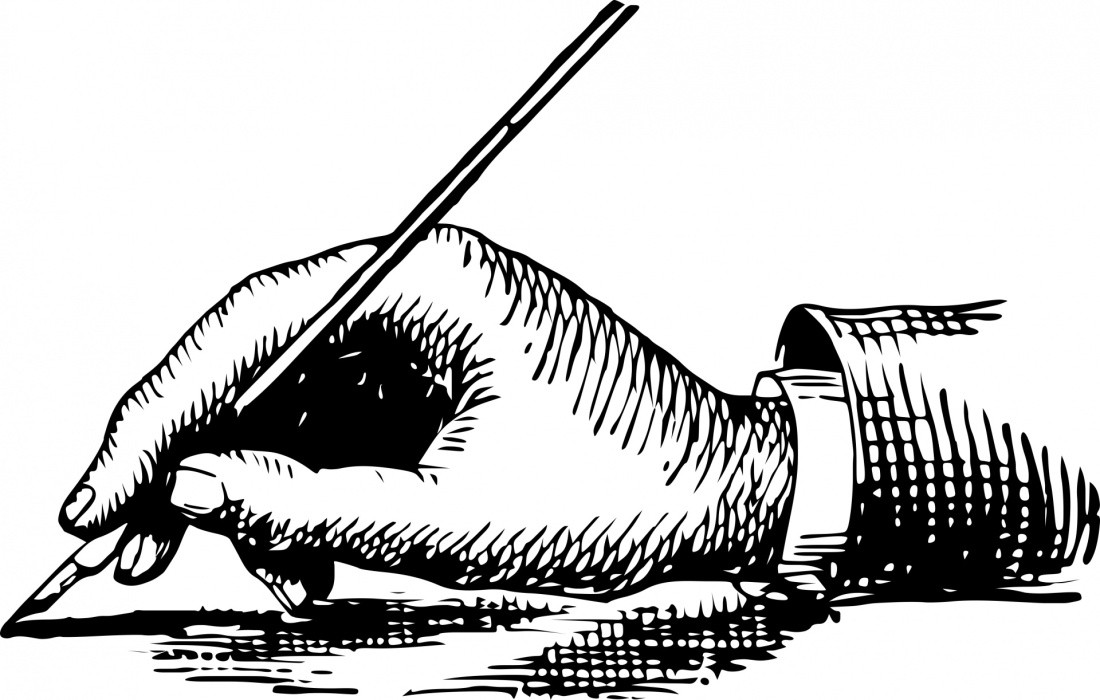 Thanks to Dawn Hudson for releasing her ‘Re digitized public domain illustration of a black and white human hand writing with a pen’ into the Public Domain.