Scowling and stamping her cane, as soon as the door was closed and we were hermetically sealed inside her house, Bernarda Alba (Charlaye Blair) dominated the stage of Michael John LaChiusa’s musical from the start. Only towards the end, with the horrific scene outside (a young woman who had murdered her baby born out of wedlock pursued by a stone-throwing mob) did we understand the tremendous social pressure she was under to keep her virgin daughters inside and inviolate until their wedding day. The heavy cross on the wall beside the huge wooden door, the smoking thurible (wielded with the rhythmic clink that marks the expert thurifer) and the imagined image of the Virgin, addressed in prayer, all set the scene for the patriarchal funeral and the funereal matriarchal atmosphere that followed.

Megan-Louise Fraser had the hard job of performing alternatively as virgin, mother and crone in the characters of the mad Maria Josepha, the matronly (and plainly bored) neighbour Prudencia and the young maid, lowest of the low in this very hierarchical household. The contrast between her youthful features and the dress and grey hair of the mother of Bernarda Alba gave us the insight that inside every grandmother there still lives a young woman.

Gemma Elmes (servant) set her face with all the strong character of the gitanas of Andalucia, yet could also be merry and her voice was a delight. Erin McCullagh (Poncia) played the part of the poor relation well and provided an occasional buffer to the tyranny of the mother of the five unfortunate girls.

Such was the magic of this show that we were persuaded by the insistence of the cast to suspend our disbelief and accept that the very beautiful Abbie MacNeil (Angustias) was, in fact, the ugly sister – though the one lucky enough to receive the attentions of the never-seen male suitor. That she was not the only one receiving his attention was the constant rumour, suspicion, jealously and scandal of the other sisters: dignified but playful Magdalena (Heather Crook) and Amelia (Johanne Rishaug Hellman); besotted Martirio (Caitlin Mae); and minxy Adela (Laura Sweeney).

This challenging show was beautifully choreographed by Kally Lloyd-Jones, with the dancers moving now in unison, now in a complex swirl of stage-setting and striking poses lit by the changing hues of set and lighting designer John Holding. Stage management by Holly Adams was, as it should be for this most self-effacing theatrical role, so good it was invisible.

Having lived in Granada for years, I must confess my initial disappointment that more was not made of flamenco rhythms but on reflection the high social status of the household may well have included a disdain for the music of the pueblo and I could not fault the melancholy combination of oboe/ cor anglais, viola and cello, nor the brio of the guitar-playing by Ross Wilson. Directing the music (and playing piano) Christopher Breckenridge accompanied the cast as they moved effortlessly from intoning liturgical chant to singing the sinister ribaldry of Three Moorish Girls.

With such cast, accompaniment, setting and lighting, director Tom Cooper had all the ingredients of a great show and with percussionist Antony Irwin, and strategic slams of the cane, the door and the chairs, the dramatic effect of the action was startling. With no visual required, everyone in the audience knew what we were witnessing at the last scene and – whether we knew the story or not – everyone gasped.

A timely mediation on tyranny and the oppression of women – even (and especially) by each other.

Bernarda Alba is performed by GAMTA. 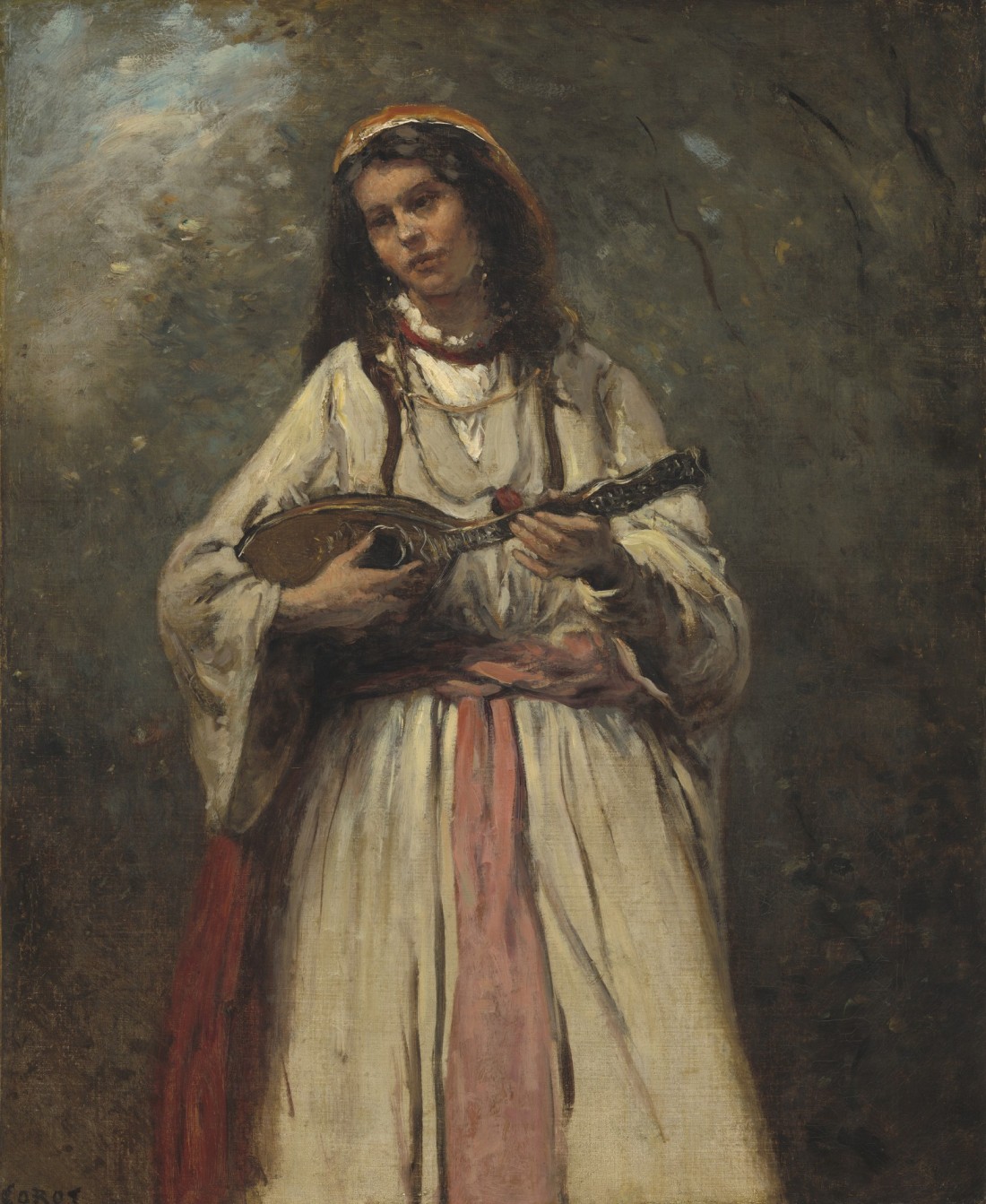 Thanks to Dawn Hudson, who has released her photo “Gypsy Girl With Mandolin, C. 1870” (Public domain vintage painting by Jean Baptiste Camille Corot, available from The National Gallery of Art) into the Public Domain.