(where it gets you)

(where I’m coming from)

First I want to salute you and to thank you for all that you’re already doing for animals, for human health and for the planet. Whether you’ve been vegetarian for days, for weeks or for months, you have already saved the lives of many animals and meaningfully contributed to the fight against high blood pressure, heart disease, cancer, obesity, diabetes, land abuse, poverty, climate change and ecological disaster. If you’ve been vegetarian for years, then you remember when this was much, much, harder, when you weren’t only considered uncool but a socially awkward freak and when you had to not only put up with the severe limitation (or non-existence) of vegetarian options when dining out but the constant verbal harassment of omnivorous friends, acquaintances and total strangers who felt totally justified in listing the varieties of dead animals they would and wouldn’t eat, their inexpert opinions on nutritional health and their unethical take on the hypocrisy of vegetarians (as opposed to fruitarians).

No matter how long you’ve been vegetarian, you may also have had to put up with being criticised and lectured by vegans – and for that I sincerely apologise. (If you’ve been lectured by fruitarians please just put up with it. I’m not sure how long these good souls survive and, like Mayflies, we should appreciate them while they’re still here.)

I turned vegetarian when I was eight and for many years (even until I turned fifty) I would tell people this then exclaim, “my goodness, that’s twenty years!” and for one glorious moment be 28 again. But when I was 28, being vegetarian was really hard (and when I was 8 it was Hell!): soya mince was pretty tasteless but the only meat substitute, the usual ‘vegetarian’ option in restaurants was fish, salads were awful (I’m Scottish and people wonder why I lived for years in South American and Mediterranean countries) and the reaction of waiters and chefs to the question ‘is there ham stock in this?’ was often either astonishment or belligerence.

Nevertheless, I persisted. Waveringly. For some years I ate fish (so was, technically, an ovo-lacto-piscatarian) after spending time in a Mexican fishing village and justifying my choice with the thought that I was really against vivisection and factory farming. Three times I tried to turn vegan but, although it was fairly easy at home, I just couldn’t take the hassle outside. As I even bought my shoes and belts in charity shops (so I wouldn’t contribute to the leather industry) I felt fairly ethically consistent.

Fairly. Vegans got to me not only because they were often so self-righteous (especially the ones who’d been vegan for approximately 5 minutes!) but because their ethics had already convinced me. All I needed was a gentle (not aggressive) push. That came in the form of a short Youtube video made by vegan Jains. These lovely people, asking forgiveness for any harm that the making and showing of this video may have caused, speak simply and from the heart: the dairy industry depends on the killing of male calves and industrial egg production on the killing (often by mechanical grinding up) of male chicks only hours old.

Namaste. The divine light in me salutes the divine light in you. In the end, whatever the words we use to describe our ethics (or our spirituality) it’s all about compassion. You have already opened your heart so much and I love you for it. Open your heart still more. Don’t worry if you can’t be consistent. We’re all human. Don’t worry if some days it feels like a bit of a bind and you wish you were more organised (or that other people were more generous in their opinion of you and provision for you).

Nevertheless, you persist. The world needs you to turn around just a little more and by this conversion to educate, to liberate and to heal so many hearts. Try turning vegan. For greater goodness and for even more love. 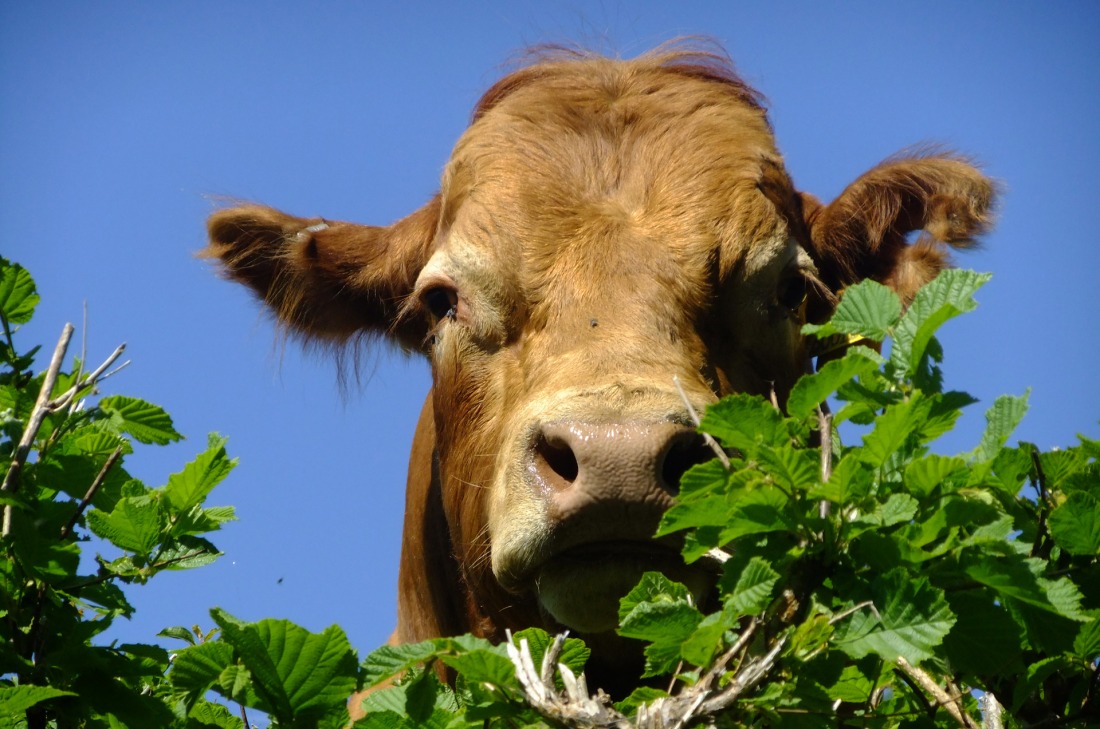 Thanks to David Bollard for releasing his photo, A Cow Peers Over A Hedgerow, into the public domain.

3 thoughts on “A love letter to vegetarians”