There’s something about Wuhan that most of us have missed. Forget the bat soup, racoon dogs, civet cats and pangolins – and all the other elements of orientalia that have made this such a spicy story. Even before the outbreak of this viral panic, Wuhan was one of the most polluted cities on Earth. So it’s unsurprising that, when the epidemic of testing began, so many of its inhabitants were found to be coughing and sneezing, to have respiratory problems from heavy colds and flu, and shadows on their CT scans indicative of pneumonia.

That data is all accounted for by air pollution, especially the specific combination found today in China’s ‘medium-sized’ industrial cities where the airborne particles of modern industrial chemical waste mix with the old-fashioned smog from fossil fuel burning – which was infamous in London’s ‘pea-soupers’, the toxic miasma filled with the imaginary villains of Sherlock Holmes (and the real ones, like Jack the Ripper).

In Italy, the data appears to show a similar correlation, as there have been higher levels of air pollution for years in the areas where viral phenomena (the cycle of symptoms, panic, testing, aggressive medication and intubation, sickness, death, publicity and more panic) are now most prevalent.

This is also true in the UK where ClientEarth reported in October 2019 that modern air pollution has been a dirty little open secret for decades. Even the NHS noted a link between pollution and pneumonia back in 2018. Where are the hot spots according to ClientEarth? In order of times over the legal limit of air pollution: Greater London (2.2); South Wales (1.6); West Midlands Urban Area; Glasgow Urban Area (both 1.5). Of the 39 other UK ‘zones’, only 6 are under the limit – and 5 of those (at 0.9 or 0.8) are just under it. The other one (at 0.7) is the Highlands of Scotland.

Unfortunately, as Camilla Hodgeson of the Financial Times points out, epidemiological (at basis, statistical) ignorance has caused confusion so widespread, that it is impossible to compare rates of mortality across the world. The ‘death rate’ figures published around the world are incompatible with each other (technically ‘incommensurable’ meaning they aren’t measuring the same thing) as some are percentages of the population as a whole, some of ‘confirmed cases’, some of the latter who have been hospitalised – and even then different countries have different approaches to testing and treatment. So, basically, these figures tell us nothing.

Added to that, media insistence, especially in the tabloids, on sensationally reporting mortality in terms of individual deaths rather than percentages of population hides the fact that (e.g.) 1,228 UK deaths from seasonal flu/ pneumonia/ other feverish or respiratory conditions, as an aggregate of mortality of 3 months out of a population of some 68 million people works out at a percentage of approximately 0.0006 a month. (And that figure has to be reckoned against the UK birth rate, which even in decline is still about 11 per 1,000, so 1.1%.)

So the general UK population is not being decimated by an insidious plague from the Mysterious East.

Is this why the same tabloid feels the need to ramp up numbers with a huge table giving figures for Europe and the United States? That’s a larger number but it’s still a percentage of an even more immense number.

In summary, what we need to know is not the number of cases, or even the number of deaths. In terms of causation, and prevention, that data is useless. Even the death rate doesn’t help – especially if differently calculated from place to place. What would help is to know the rate of excess death.

Professor Ioannidis, who might be trusted to know a thing or two about numbers and the spread of disease, has this to say:

If we had not known about a new virus out there, and had not checked individuals with PCR tests, the number of total deaths due to “influenza-like illness” would not seem unusual this year. At most, we might have casually noted that flu this season seems to be a bit worse than average.

With so many people panicking and submitting themselves to the most aggressive and unnecessary medication and medical interventions, that’s hardly surprising! 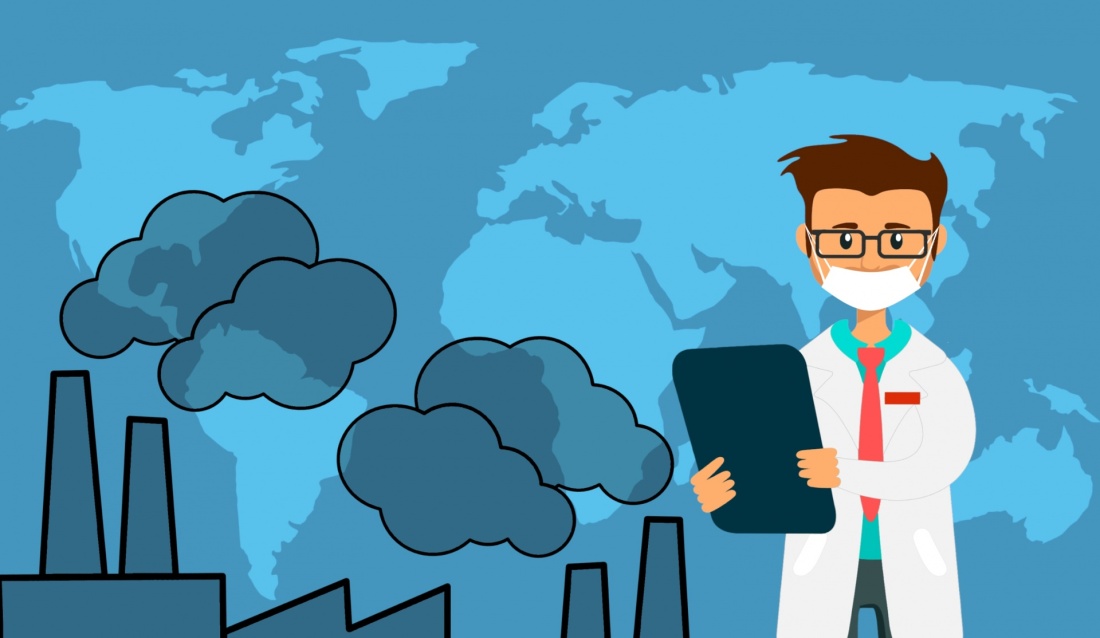 Thanks to Mohamed Mahmoud Hassan for releasing his image “Air Pollution” into the Public Domain.